THE chips have been sampled and the votes have been counted in the epic battle to be named the best in Edinburgh.

And today we can finally reveal the chippie which has scooped our coveted Chip Shop of the Year award.

It fought off strong competition from across the city as the votes flooded in by coupon and text.

Today staff there thanked all their loyal customers for supporting them in their campaign to top the takeaway tree.

Owner Ida Scarano said: “We are very pleased and I would like to thank all the customers who have voted.

“My husband and my team and my son all deserve it as well.

“It’s your team that works with you and helps you take the business forward.”

She said the victory was a particularly important achievement in light of the high level of competition in the area.

Ida, whose maiden name was Crolla, is part of the dining dynasty which runs Vittoria’s next door and La Favorita down the road.

She said: “My parents have run Vittoria’s for 47 years and my brother runs La Favorita. My parents opened the takeaway in 1981 and I have worked here all my life.

“My son Paolo, who is 21, is very much involved with the delivery side of the business.”

Asked why she thought customers had voted for Eatalia in such large numbers, Ida said she believes the use of fresh ingredients and homemade sources is key.

She said: “All our ingredients are fresh and our potatoes are freshly cut every morning on the premises. A lot of places used frozen potatoes, which taste different.

“We have fresh fish delivered every day and our pizza dough is made on the premises every day.

“Even our bread is homemade.”

Ida used to help her father after school and when she left school at 16 it was to join the family business.

The 41-year-old took over the running of Eatalia and is well-known locally through her work at the takeaway.

Apart from the freshness, the other big selling point of Eatalia is the variety on the menu.

Unsurprising bestsellers include fish and chips and any one of the 32 varieties of pizza on offer.

Meanwhile, pasta dishes are complemented by the likes of chicken wings, a mozzarella-topped bruschetta and cheese stuffed jalapeno peppers.

Their victory in the Evening News competition is by no means Eatalia’s first taste of success, however. The shop got huge exposure on the BBC’s Take On the Takeaway cookery series, when it narrowly lost out to celebrity chef Antonio Carluccio on points.

And the takeaway has won two PAPA industry awards for its pizza and pasta.

To win the Evening News Chip Shop of the Year crown, Eatalia’s had to amass the greatest number of reader votes, via coupons and text.

The contest started in February and saw an initial shortlist whittled down to a top ten. Since then the competition to claim top spot has been fierce. News Managing Editor Frank O’Donnell said: “Huge ­congratulations to Eatalia’s, which is a worthy winner of the title.

“This award is voted for by the Edinburgh public, who are rightly demanding about the quality of their local takeaway and the service it ­provides.

“Eatalia’s sparked a huge response from its loyal customers.

“Thanks to everyone who took the time to nominate and vote for their favourites.”

All of the takeaways nominated in the competition were praised for the high quality of their ingredients and value for money.

John Wild, one of the directors of the National Federation of Fish Friers, said fresh produce was the key to a truly fine fish supper.

He said: “The great thing about fish and chips is it is really simple.

“There are no additives and no nasties in there, so what you see is what you get.

“As long as everything is cooked properly and you have the best provenance, then it is much healthier than your ­average korma.”

He praised Scottish fish and said there was a great selection of suppliers for chippies in the Lothians to take advantage of.

Mr Wild, who runs the award-winning Tarnbrook Chippy in Morecambe,  Lancashire, added: “It has been one of the top dishes since it started and there are lots of restaurants out there offering a fantastic experience alongside the food.”

The staff at Eatalia’s will no doubt be having a party after their success, so what will be on the playlist?

• Sitting in Haddock of the Bay

• Things Can Only Get Batter

• Heaven is a Plaice on Earth

• Smoked Sausage Gets in your Eyes

• I Believe I Can Fry 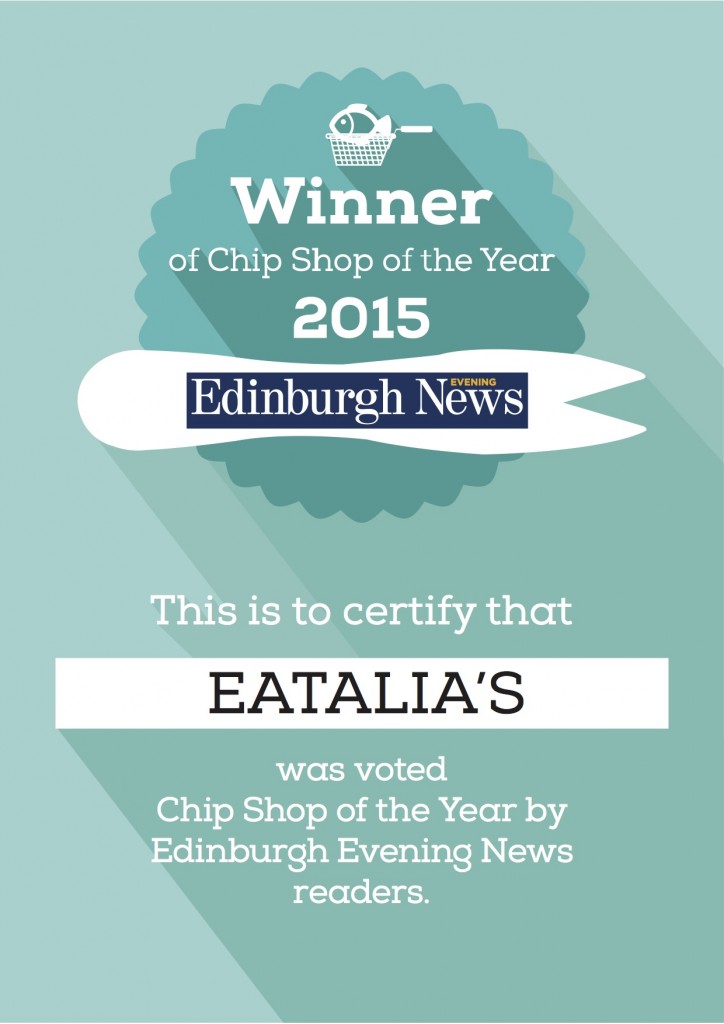