People from Belfast eat fish and chips the most often and are the poshest noshers, preferring to eat off a plate (64%) as opposed to out of the paper or box (34%), according to research commissioned by Seafish, organiser of The National Fish & Chip Awards.

Further research shows that Londoners aren’t far behind with 46% preferring to eat their fish supper off a plate compared to 38% out of the paper or box. Not surprisingly, amongst the ten cities surveyed, the most popular place to eat fish and chips is from a takeaway (87%).

Meanwhile, a further national survey conducted by YouGov looking at how fish and chip lovers eat their favourite takeaway, found that around two thirds add salt (65%) and vinegar (68%), over a third (37%) have mushy peas with their meal and more than half the respondents (52%) prefer eating fish and chips straight from the paper or box.

Not surprisingly, the seaside emerged as the nation’s favourite location for enjoying the humble dish (31%), followed by at home on the sofa.

While mushy peas were voted the UK’s top accompaniment, 20% choose curry sauce and 19% of the younger generation enjoy the continental habit of adding mayonnaise.

Andy Gray, of The National Fish & Chip Awards, said: “It’s reassuring that as a nation we still love to eat our fish and chips the old fashioned way with plenty of salt, vinegar and mushy peas.

“However, it’s clear that there are some interesting variations on how people eat their fish and chips depending on where they live; curry sauce in Birmingham, tomato ketchup in Newcastle, gravy in Manchester and salt ‘n’ sauce in Edinburgh. Everyone has an opinion on how and where fish and chips should be enjoyed.”

Nine of the 12 cities surveyed listed tomato ketchup as their favourite condiment after salt and vinegar, with nationally one in every four respondents smothering their chippie portions with red sauce.

Nationally, men eat fish and chips more often than women, with 41% consuming crispy battered fish and piping-hot chips at least once a month, compared with 30% of women.

City by city, the research also shows that:
•         Belfast: eats the most cod (81% of respondents prefer cod) and is tops for splashing on vinegar (80%).  People in Belfast eat fish and chips most often (54% enjoying it at least once a month)

•         Cardiff: Cardiff add salt (89%) the most frequently and like Glaswegians, love eating them on the way home from the pub 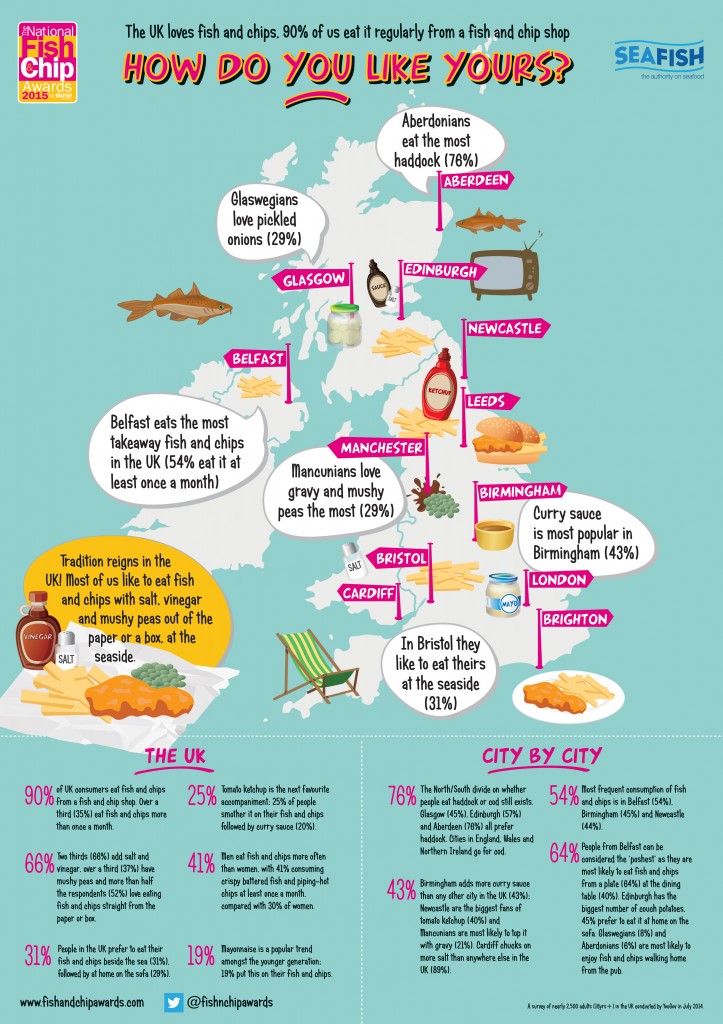